LBB: The Or Unveils the Grocery Ordering Desires of London in First Ad for Gorillas 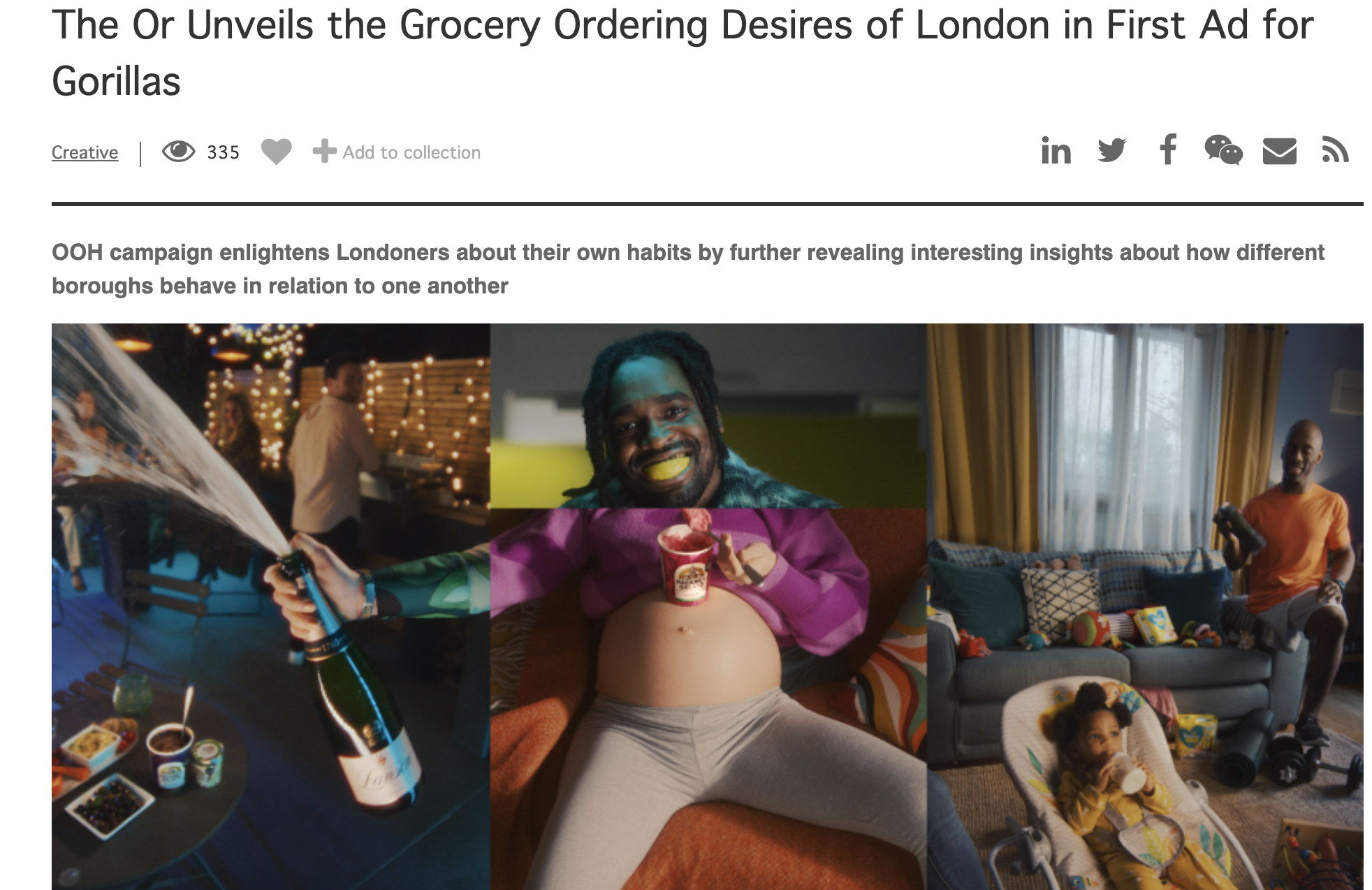 Creative agency The Or is launching a multimedia ad campaign for grocery delivery service Gorillas to mark the brand’s first year operating in London. This is The Or’s first campaign for Gorillas since it was awarded the account in 2021 without pitch.

Briefed with bringing to life the weird and wonderful ways that Londoners use Gorillas, The Or’s inaugural campaign breathes life into a year's worth of data.

To differentiate itself in a highly saturated market, the bold, eye and ear-catching creative digs into facts and figures from the eight million products Gorillas has delivered in the capital since its London launch 12 months ago.

The TV execution takes inspiration from digital native behaviour where people stitch together content to make them interact with one another in humorous ways, to show the weird and wonderful truths that Gorillas knows about Londoners. This technique combined with a series of double-entendres neatly highlights the products Londoners typically order through Gorillas in a way sure to titillate. We’re informed that Londoners love ‘blowing’ (their noses with tissues and downing cold and flu products), ‘getting smashed’ (with the hipster favourite, avocados) and ‘double dipping’ (crisps into different salsas). The ad finishes with the line: “Whatever London wants in minutes.”

Directed by up-and-coming London talent, Ethan and Tom from Academy, London and its eclectic subcultures very much sits at the heart of the creative approach for the work. To show Gorillas really understand London - the film is peppered with hidden easter eggs that true Londoners will spot.

Not only does it feature a cast of familiar London natives like illustrator Mr.Bingo, singer Hak Baker, and model Mia Wells, but the music also comes from homegrown Londoner Little Simz and the voiceover is Kennington-born rapper Sam Wise.

A provocative post-watershed 30-second execution and a tamer pre-watershed version will run on TV and VOD. There will also be radio, digital and social coverage of the campaign plus OOH executions with projections, 48-sheet, six-sheet posters and murals.

The OOH approach continues to enlighten Londoners about their own habits by further revealing interesting insights about how different boroughs behave in relation to one another.

One poster says: 'Lewisham lets it grow'. Then explains: 'Ordering the least number of razors in all of London'. Another says: 'Islington loves getting smashed'. Then explains: 'Ordering more avocados than all of London. 135,598 to be precise'. The headline 'Shoreditch is hitting the bottle' gets the explanation: 'With their grocery orders including three times more follow-on formula than neighbouring Newham'.

With photography by lifestyle photographer Jenna Foxton, the photography approach mimics the technique of the TV by piecing different scenes together to create a larger image.

The Or London also helped Gorillas launch this campaign with an activation that coincides with the grocery delivery app’s first birthday in the UK. Inspired by the campaign’s tagline ‘Whatever London Wants’, this activation will allow Londoners to really test out what that means.

For one week only, customers are able to order whatever money can buy (up to a value of £400)*. All customers have to do to get in on the action is place an order via the Gorillas app, use the promo code ‘WHATEVER’ and head to the delivery instructions to request whatever their heart desires. Eight lucky winners will be chosen.

Danny Barry, head of brand Northern Europe for Gorillas says: “We are not like other instant delivery services so our comms need to feel different too. That’s why we decided to work with The Or, who are all about doing things differently. We dug into our data to discover some fun facts, and collaborated with The Or to bring our insights to life in a playful and provocative campaign.

As the data shows, we’ve delivered everything Londoners could want whenever they’ve wanted it, from late night tea bags to 32 chocolate bars in a single order. This campaign celebrates the fact that we know our customer base, and we are confident it will inspire others to try out the Gorillas app to get the products they desire in minutes.”

Paulo Salomao, co-founder and business lead at The Or says: “Gorillas is a really exciting client win for us – an ambitious start-up that wants to shake up the market and connect with younger generations in mould-breaking ways. What better way to get Londonders to sit up and be interested in on-demand groceries than letting them know what their neighbours are ordering? This is a big idea that can rise above the industry clutter and we look forward to seeing it run in London and then other cities around the world.”